Obama has stated that he is founded a nonprofit foundation to help create “up and coming leaders.”

First, the decision to start a foundation with the stated goal of producing more of yourself, is incredibly narcissistic. It sounds nobler and bolder when he refers to himself in the third person with that statement. Replace the quote with “me” instead of “Barack Obamas: ““If I could do that effectively, then – you know – I would create a hundred or a thousand or a million young “mes” or Michelle Obamas.”

“Or,” he continues at the Tokyo conference, “the next group of people who could take that baton in that relay race that is human progress.” You see – he equates himself to an individual that has contributed to the “relay race of human progress.”

On the surface this sounds noble. But he is conveniently omitting all of his negative attributes and assuming himself to be an adequate leader. Let us consider the whole picture. Remember: Barack Obama was responsible for the invasion of several sovereign countries (resulting in an uncontrollable refugee crisis and the death of thousands of innocent citizens), the bombing of innocent civilians and citizens without due process or cause, the murdering of American citizens on foreign soil, the continuing of the abrogation of our constitutional rights, and the maintenance of our country in a state of perpetual warfare without consent.

However, this narcissism is a recurring theme among the political elite and Donald Trump is simply the newest manifestation of that. He is not the first politician to be this way – simply the most transparent.

See this poster below of Hillary Clinton and how the mainstream media assists in inflating the egos of our political elite. Granted, they could have made the planet look a bit more attractive. The quote at the bottom of the poster asks: “Can she make the stars align, or will chaos prevail?” 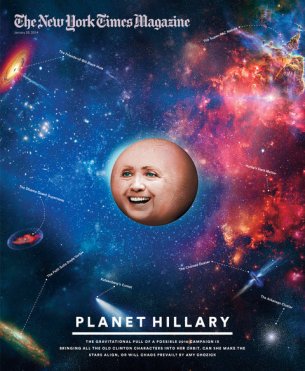 These are our leaders folks: psychopathic narcissists.